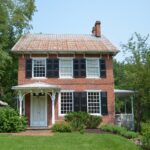 The Potter-Allison Farm is an agricultural complex built by General James Potter, one of the first settlers of Penns Valley, and expanded by a 19th century owner, William Allison. The complex, which is on the National Register of Historic Places, comprises the Potter-Allison House, a barn, a springhouse, and six other buildings. 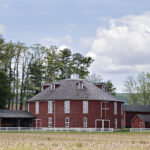 The Neff Round Barn, popularly known simply as the Round Barn, is one of the most recognized agricultural structures in Centre County. Built in 1910 by Calvin R. Neff and Aaron Thomas, the barn is on State Route 45 about 2 miles from Old Fort in Potter Township. After his retirement as a school teacher […]

Leonard Rhone was a farmer, Pennsylvania state legislator, and founder of the Centre County Grange Encampment and Fair. Rhone was born in 1838 in a log cabin built near Centre Hall by his grandfather. Rhone and his father Jacob rebuilt the family homestead into the Georgian-style estate they called Rhoneymede, a German-derived name meaning “Rhone’s […] 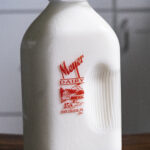 Meyer Dairy, established in 1887, is the oldest continuously operated retail dairy in Centre County. The dairy store on South Atherton Street in Harris Township is particularly beloved for its milk, which is still sold in glass bottles. 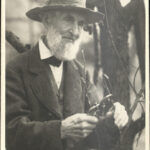 William G. Waring was Principal of the Faculty and Professor of Horticulture at the Farmers’ High School of Pennsylvania. William Griffith Waring was born in Herefordshire, England, in 1816 and emigrated to Centre County where he became a teacher and a nurseryman, owning a farm in Oak Hall. Waring organized the first teachers institute in […] 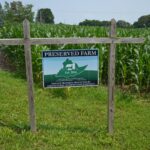 The county’s agricultural history is geographically bifurcated. The Allegheny Front divides the fertile Ridge and Valley region from the agriculturally less well-endowed Allegheny Plateau. On the plateau, diversified small-scale farming and industrial work intermingled, while in the valleys, there was a more agricultural economy.